A daring plan is conceived to raid the Overseer camp and find proof of their crimes!

Since Dov can play Ruck better than Ruck can play Ruck, he has Change Self cast on him to resemble the hunchbacked illusionist. Dov-as-Rucksack (“Dovsack”? forgive me) presents himself to the camp in a false panic, yelling “The Pure are here! The Pure are here!”, or words to that effect. Meanwhile the real Ruck, invisible and standing nearby, makes illusory sounds in support of said Pure imminently arriving. The bluff works to a point!  Most of the Overseers, mercenaries to the core, see no value in sticking around and ride away on the available horses, preferring to avoid any run-ins with the paladins. But Arch-Overseer Brunus Tostyn herself sees right through Dov’s sham, calls him a betrayer, and attacks him forthwith.  It’s a difficult battle that ensues, with Brunus and a couple of her loyalest minions sticking by to fight you off.  Debilitating Color Spray saves the day, and though Rucksack takes a major wound and is forced to retreat, he later surprises everyone by coming out of invisibility to blast his blinding ray in support of the take-down. 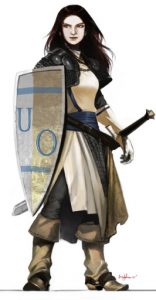 Brunus and another Overseer are ultimately captured, the camp is searched, and evidence of the halfling massacre is discovered.  You offer Rucksack the chance to testify against his ex-compatriots and he agrees, but only if you’ll give him a locked chest you find among Brunus’ things. (Later, you discover the chest is filled with the villagers’ gold.) You turn down his offer and the illusionist turns to hobble away into the wilderness, his fate unknown. Ruck’s name is Muck now; word of his betrayal will likely spread among the Overseers; so perhaps he doesn’t have long to live.  Before he goes, he turns back to admit to Daisy one more thing –  he was there at Willowdale, dragged along to detect magic. He says he found nothing though.  The news is significant to Nim, but baffles Daisy.  Why would there be magic in her village?

You drag the two prisoners, plus what you can of any Overseer loot, back to Smidge.

Though feelings may be complicated for everyone, the events of the last couple of days have made you feel more accomplished and capable. (Congrats on leveling up!)