Skip to primary content
On the march back to Smidge, you notice your prisoner Brunus Tostyn has an ominous star tattoo. 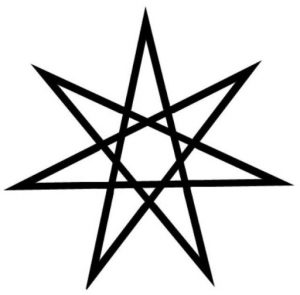 The Ex-Arch-Overseer stays mum except for barking at her subordinate and fellow captive Dulphus Prokler to keep his mouth shut, promising him they’ll get out of this scott free and be rewarded for their silence.
You commandeer the inn and have Mayor Goblicus summoned. A crowd forms, filling the Urn & Basket to capacity.  Dulphus is taken to a room upstairs with Nim and Dov, and separated from his boss, he bends under their deft interrogations, providing more details about the Willowdale Massacre. The mercenary tries to downplay his own involvement, making it seem as if he was just an innocent bystander to the cruel and wanton debauchery, but he’s a terrible liar …and person, it goes without saying.

He tells you that:

The wizard Trimphid (aka “Lord Arrowhawk”), the Overseer’s real boss, had sent them to the halfling village simply to look for some kind of flower symbol. It was a decoration on an inn sign, and they were supposed to find out if any of the villagers had any other items with that iconography. The whole mission was pretty laughable and pathetic to them – a flower?  They were bored, had been promised more action than just hanging out at camp pretending to watch out for fake orcs, and were keen for blood sport. Trimphid had sketched out the mission’s goals, but Brunus figured the precise methodology was up to her. She gathered the villagers together and had a few of them killed to intimidate them into giving up any flower symbol goods. The situation quickly escalated, however, into a full-on killing spree, with Brunus spurring her Overseers on, which led to the whole place getting ransacked and set ablaze. Dulphus couldn’t conceal his own delight in memory of the event: “I mean, how often do you get rip through a whole village of halfies like that, with them all runnin’ about, in and out off their little wee homes, screamin’ and carryin’ on? We cut through ’em like wheat in the field. Some of ’em halfies even tried to fight us back. Too funny!  Ahem, er, I mean, uh, tragic.”

Needless to say, no other items with the flower were found, and when Brunus finally remembered to have Rucksack cast Detect Magic (his whole reason for being dragged along), the whole village was already in cinders.  Ruck didn’t find any magic, no big surprise, so the group headed back to camp. It was determined they could just blame their little indiscretion on orcs.  On the way back, they stumbled onto one more halfling, a shepherd, tending his flock of sheep. Not wanting a witness to them being in the vicinity, they were just about to kill him when Brunus thought it would be funny to give the halfling to Trimphid as a sort of gag gift.  They painted the flower symbol all over his body and face and offered him to the wizard with a hearty, “Here ye go, milord!”

Dulphus agrees to testify at trial, though he thinks he’s doing it in exchange for Dov and Nim getting him of trouble with the paladins.  Nim is able to convince the mayor that she is something of an expert on werewolves.  He agrees to let the party take the imprisoned druid (I mean “Nature Wizard”) with them when they leave. Returning the chest filled with villager Overseer fees does a lot to make the mayor amenable to the idea.

The next day, Dov, remembering the rumor that Trimphid has a servant named Anafrid Pugis living in the village, tracks her down at her house. She’s in her twenties, friendly, and is happy to chat with one of the do-gooders who exposed the Overseers. She gives Dov a book about the Chrygora family.  Anafrid explains that the Pugis family has served the Chrygoras as stewards for centuries. But there was supposed to be a break in tradition in Anafrid’s case. As she showed magical aptitude in her youth, Trimphid had promised her father that he’d take her up as an apprentice, but that never happened. The wizard preferred to keep her as his housekeeper. Anafrid hates him with a passion, and not just for refusing to keep his promise. While she was just a baby, a youthful Trimphid was experimenting with summoning and used the Pugis family home as his staging ground. Something went awry with the magic and the wizard in response simply left the house and forbid anyone to enter it ever again.  Loyal to a fault, Anafrid’s father said nothing, and the house has laid rotting ever since (becoming the source of the rumor of a haunted house in the village).  Trimphid has gained considerable power since that time, and at any point in the last twenty years, could have gone in and fixed the problem with a wave of his hand, but he simply hasn’t felt like it. Anafrid reveals that he left town in a hurry a few days ago, accompanied by a mysterious halfling companion. She is fed up with her life of servitude and eager for an opportunity to betray her master. She agrees to let you in the front door of his manse (called “Hawksperch”) if Dov and friends can go in and clear out whatever is still in her old family home. “I’ll get you into his house if you get me back into mine.”  Dov agrees to the deal. Perhaps the wizard’s house will contain more clues.

Meanwhile, Daisy is informed about her brother Tumn’s fate, and chats with Nim. 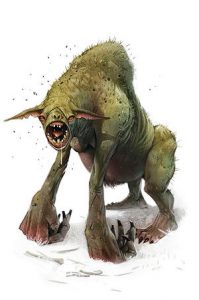 Later, everyone meets up and checks out the abandoned house.  Inside they find a disgusting huddled, bloated demon thing called a dretch.  It tries to use its diabolical magic to cause fear in Ambrosius, but fails.  A stinking cloud it emits is more successful, nauseating Nim and Dov, but Daisy and her valiant dog are able to keep the thing preoccupied until their friends regain their composure.  The demon, being from some other plane of existence, has some intrinsic means to absorb some of the damage from attacks. Realizing a celestial ally that can smite good will be effective against this foe, Nim summons a magic pony. Huzzah. 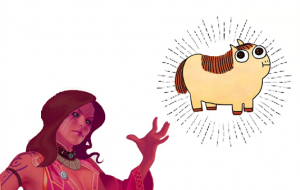 The demon is eventually wounded within an inch of its life and tries to flee.  Daisy charges, performs a nice finish and cuts it neatly in two. Huzzah huzzah.  Inside the house, you find some kind of magical cowl that is so powerful it’s off the charts of what Nim can even identify.